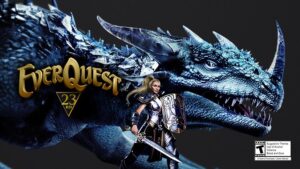 – March 16th marks EverQuest’s 23rd anniversary! The Mechanical Fortune Teller in the Plane of Knowledge has information about new quests, a new mission, and a new raid.

– Ranger – Irae Faycite Shard: Summer’s Torrent is now available in Maiden’s Eye (Terror of Luclin).
– Rogue – Irae Faycite Shard: Netherbian Blade Strike is now available for purchase in Maiden’s Eye (Terror of Luclin).
– Royal Antonican weapon ornaments can no longer be claimed while equipped on a weapon. They will have to be removed from the weapon before claiming a different ornament.
– Flagged many Gates of Discord key items as quest items.

– Now all four missions in Terror of Luclin will have 6-hour replay timers. We previously changed 3 of them and neglected to message that change.
– Aten Ha Ra (ToL Mission/Raid) – Improved the combat pathing for NPCs in Aten Ha Ra’s room.
– Aten Ha Ra (ToL Mission/Raid) – Added a speculative fix for the possibility that adds can spawn after the event is won.
– Shei Vinitras (ToL Mission) – The mission chest should no longer spawn until you have credit for killing Shei Vinitras.
– Shei Vinitras (ToL Mission) – Shei Vinitras should now leave a corpse.
– Stalwart Defenders (Solteris) – Unbalancing Balreth will no longer cause the event to fail. Instead, the uncontrollable golems will spawn once for each set of Rear Guard golems if they are unbalanced. The uncontrollable golems will need to be defeated to win the event.
– March 16th marks EverQuest’s 23rd anniversary! The Mechanical Fortune Teller in the Plane of Knowledge has information about new quests, a new mission, and a new raid.

– Beastlord pets should more consistently display their name as a warder. Existing pets may need to be re-summoned in order to receive the updated name.
– Lord Nagafen and Lady Vox will no longer banish attackers that are above level 52.

– Made the following changes to Barter:
– – Relaxed the restriction on remote selling and remote buying to Shadows of Luclin instead of Rain of Fear.
– – Added commas to the display of prices in the Barter and Buyer windows.
– Made improvements to how offline characters are saved in an ongoing effort to reduce lag spikes on the world server.
– – World server lag spikes typically manifest themselves as extended zoning times and delayed cross-zone communication (tells, guild chat, etc.).
– – This particular change reduces lag spikes that were caused by the world server unnecessarily waiting for background work to complete.

– Accepting a resurrection will now update your respawn window selection to the location of your corpse.
– Fixed a bug that caused a crash when the Manage Loot window was being used.
– Fixed a notorious crash that occurred when changing filters in the Advanced Loot Window.
– Updated the /copylayout command to properly copy hotbutton window size, spinner, and keymap options.
– Converted the Effects, Short Term Effects, and Target windows to dynamically layout the positioning of effects and support a variable number of effects.

– Increased the amount of loot that drops in many Lost Dungeons of Norrath raid chests. The odds of what items are dropped each time were also altered in most cases where the number of rolls increased.