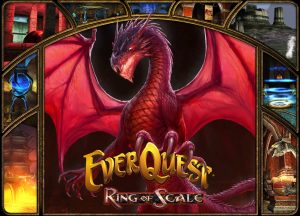 – Removed the stacking on 5 Dose Potion of the Bone Field and 10 Dose Potion of the Bone Field items. Changed Toy Eye Ball to one charge.
– Fixed a typo in the lore of Overgrowth Shears.
– Restored mana preservation to The Burning Lands evolving shoulders that include classes with mana.
– Consolidated the various mount blessings. In nearly all cases, the new buff is equal to or an improvement over the previous buff, with the exception of Mount Blessing Izah which has had its AC value reduced to be in line with the other mount blessings.

– Guntrik’s quests – Sven and Philicia Drinn are no longer merchants and can be killed.
– Strange Magic – Pets and mercenaries will no longer flee right after the first golem is defeated.
– Destroy Marnek’s Wand – If a character who has handed in the wand loses their Suncrest Isle instance, the fisherman will offer a new instance.

– Buffs that absorb hits (up to a maximum damage value) will no longer fully negate resistible spells. These buffs will continue to properly block the intended amount of damage from spell and melee attacks.
– Corrected an issue that allowed certain types of pets (Cleric hammers, Wizard swords, Magician runes, etc) to be hit by detrimental spells. They are now immune to all spells as intended.
– Bard – Added a target limit of 5 to the Denon’s Desperate Dirge line of AE damage songs.
– Cleric – Sacred Word and Stun Command now have their target limit explicitly defined on the spell.
– Druid – The Heliacal Flare and Lunar Chill lines of targeted AE spells now have their target limit explicitly defined on the spell.
– Magician – Fixed an error that caused pets that used Fire Elemental Bolt I-VII to deal less damage when focused. Increased the power all ranks of Fire Elemental Bolt VI and VII.
– Magician – Corrected an error that made fire pets on Progression servers deal more damage than expected in Kunark, Velious, and Luclin eras.
– Wizard – Thunderbolt now has its target limit explicitly defined on the spell.

– All – Refunded Identify as this ability is redundant now that item descriptions are displayed when inspecting items at level 50+.
– All – Fixed a typo in the description of Veteran’s Enhancement that errantly stated the ability increased your worn mana regeneration cap rather than your worn health regeneration cap.
– Multiple – Renamed the non-pet class ability ‘Pet Discipline’ to ‘Companion’s Discipline’ to be in line with the naming used for pet classes.
– Bard – Refunded all ranks of Steady Hands and increased the base pick lock skill cap for bards for levels 80+ by 40 points. The skill bonus was reduced from 60 points to correct a few level span where bards had a higher skill cap than rogues. The skill cap increase is being granted at level 80 rather than level 70 due to the ability initially releasing with Secrets of Faydwer.
– Bard – Capped the maximum number of opponents that can be hit by Vainglorious Shout to 6 and increased the endurance cost for all ranks of this ability by 50%.
– Bard – Granted the ability to use Double Riposte as Bards were the only class with the skill that did not have access to this ability.
– Bard – Refunded all ranks of Tune of Pursuance and increased the base tracking skill cap for Bards for levels 65 and 96-100+.
– Berserker – Refunded all ranks of Student of War and increased the base frenzy skill cap for Berserkers for levels 101+.
– Berserker – Refunded all ranks of Weapon Proficiency and increased the base weapon skill caps for Berserkers for levels 85-105+.
– Berserker – Renamed Cry of Battle to Mass Group Buff.
– Cleric – Removed the undead-only restriction from Repel the Wicked.
– Cleric – Fixed a typo in the description for all ranks of Channeling the Divine that stated the ability granted a 50% twincast chance rather than a 100% chance.
– Cleric – Shield of Reverence has been changed to a passive ability.
– Druid – Refunded all ranks of Advanced Tracking and increased the base tracking skill cap for Druids for levels 65+.
– Enchanter – Renamed the enchant metal abilities to include the quantity as a suffix rather than prefix. Ex: ‘Mass Enchant Feymetal’ is now titled ‘Enchant Feymetal (x10)’. Refunded ‘Enchant Palladium (x3)’ and ‘Enchant Palladium (x20)’ as they were inconsistent with the rest of the abilities.
– Magician – Call Hither has been renamed Summoner’s Step and is now a teleport-forward ability similar to Netherstep or Whisperwind. Reduced the level and expansion required to obtain ranks 4 and 5 of this ability.
– Magician – Updated Turn Summoned to deal direct damage rather than damage over time and updated Infusion of Elemental Light to always deal instant critical damage that will no longer block other instances of Infusion of Elemental Light from landing.
– Magician – Updated the buff icon for Thaumaturge’s Focus.
– Monk – Consolidated Hastened Crane Stance and Focus: Crane Stance into a single line, Improved Crane Stance, and added an additional rank that was intended to go live with The Burning Lands.
– Necromancer – Call to Corpse has been renamed Summon Corpse. This ability now has 9 ranks and will cast the highest rank of your equivalent level summon corpse spell with a 10 second reuse time.
– Necromancer – Refunded Self Sacrifice as its initial purpose of dealing damage to the caster in order to benefit from other abilities is no longer required.
– Necromancer – Summon Remains now consumes 4 Tiny Jade Inlaid Coffins when cast.
– Paladin – Hand of Tunare no longer triggers Tunare’s Fatigue after fading but will now instead increase the mana cost of twincast healing spells by 100%.
– Paladin – Moved Holy Warhorse from the Class tab to the Special tab in the AA window.
– Paladin – Shield of Brilliance has been changed to a passive ability.
– Paladin – Refunded all ranks of Glorious Reflection as this ability provided no benefit given the existence of Healing Adept.
– Paladin – Consolidated Restoration of Life to be rank 2 of Gift of Resurrection. Rank 2+ will now restore 96% experience. Reduced the hastening offered by rank 5 by 1 second and increased the mana cost of ranks 2+ by 100 points.
– Ranger – Refunded all ranks of Tracking Mastery and increased the base tracking skill cap for Rangers for levels 66-70+.
– Rogue – Refunded all ranks of Weapon Proficiency and increased the base weapon skill caps for Rogues for levels 96 and 101-105+.
– Rogue – Fixed an error with ranks 5 and 6 of ‘Focus: Hack’ that prevented the ability from focusing the combat ability ‘Slice’.
– Shadowknight – Moved Unholy Warhorse from the Class tab to the Special tab in the AA window.
– Shadowknight – Summon Remains now consumes 4 Tiny Jade Inlaid Coffins when cast.
– Shaman – Improved Pure Spirit has been changed from a passive focus ability to an activated ability that casts the best rank of Pure Spirit that you have scribed.
– Shaman – Turgur’s Virulent Swarm will no longer land on PCs (including yourself).
– Shaman – Feral Bite, the damage triggered by Rabid Bear, has had its damage over time component consolidated into its direct damage component.
– Wizard – Ward of Destruction now summons a stationary aura rather than a ward. As an aura, Ward of Destruction will no longer be susceptible to damage and any opponents hit by Silent Fire will now credit the wizard as the attacker. Changed all ranks of Silent Fire from a 12 second damage over time spell to a direct damage spell that will not break root.
– Wizard – Updated Arcane Fusion to always deal critical damage and fixed an issue that allowed the ability to trigger on beneficial spells.
– Wizard – Corrected an issue that prevented Mirror Mirror from functioning as expected.
– Wizard – Refunded Translocational Anchor and updated all ranks of Cryomancy to include gate suppression as part of Cryomantic Stasis.

– Moved a spiderling in the Broodlands that was spawning inside of a tree.
– In Stoneroot Falls, a witheran named Slubber with unique items now has a chance to spawn.
– In the Ruins of Illsalin, Overseer Xygern now drops unique items instead of the same items that Battlemage Ristyr drops.

– Access to Gnome Memorial Mountain now requires that The Burning Lands is unlocked on your server.
– Corrected an error that made fire pets on Progression servers deal more damage than expected in Kunark, Velious, and Luclin eras.

– Made improvements to taunt messages:
– – Taunt messages are sent to all players in the area, and include the name of the NPC being taunted.
– – Added a new chat filter for taunt messages.
– – Failing to capture your target’s attention is more clearly indicated as a partial success.
– – Added a message when a player obtains aggro using an aggro lock ability (Ex: Undivided Attention).
– – Taunt spells are no longer blocked by spells locking an NPC’s aggro.
– – Sends a single message to players in the area when someone uses an area effect taunt (Ex: Area Taunt).
– NPC tells are now formatted as ‘Soandso told you’ while player tells (including cross server tells) appear as ‘Soandso tells you.’
– Removed an extra space from raid chat messages.
– Changed the format of tells from tell windows when writing to the log. They now use the same format as regular tells.

– Shield of Spines reports the correct amount of healing on the item description.
– Staff of the Serpent (Enchanter epic 1.0) – The spectral librarian in Kaesora can again be charmed.
– Veeshan’s Peak access – The NPCs that drop medallion pieces can no longer be charmed.