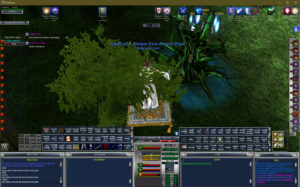 Vamilice and Qindaar spent another weekend in Gnome Mountain.  We were camping the Master Mechanic and a Non Standard Deviation

Friday night we were able to knock the Master Mechanic off twice and the Non Standard once.  Saturday night was a fiasco.  They both spawned at the same time and we wiped accidentally by pulling the entire camp.  We were so frustrated we /exit the game and called it a night.

Overall we had a great night and look forward to next weekend in Gnome Mountain.